In Brian de Palma’s 1983 film Scarface, one of the most striking scenes is set in a bathroom. In it, the protagonist Tony Montana chats impulsively to Manolo and Elvira from his cream-hued circular bathtub. The bathroom is clad in faux marble, has pink carpets and is riddled with gold furnishings. It’s the 1980s in all its splendour: loud, overindulgent and sumptuous. Here the bathroom is a veritable chef-d’œuvre, giving insight into trends at the time and unquestionably representative of Montana’s tastes.

However, bathrooms haven’t always been as ostentatious as Tony’s; in fact the bathroom as we know it is a relatively recent development. The 19th century brought numerous advancements enabled by the preceding invention of the flushing toilet by Sir John Harrington in the 16th century and the all-important S-bend, that helped trap sewer smells, invented by Alexander Cummings in 1775. But it was only in the aftermath of a London cholera outbreak in 1854, leading to the implementation of Bazalgette’s sewage network, that the modern bathroom emerged.

The early bathroom was a mainstay only of affluent homes and was often white – a feature that can be attributed to the Victoria-era belief that germs live in dirt and that untainted white was proof enough of the absence of germs. For most people it was still a matter of outdoor toilets and tin bathtubs in front of fireplaces. As the Industrial Revolution allowed for the mechanisation of the bathroom and hot water became readily available, private bathrooms became more common.

Regardless of the considerable bounds in technology, for the most part the bathroom remained a clinical space. It was in the modern era that it really flourished, along with interior design, manufacturing and consumerism. When Fordism took hold at the end of the 1920s, manufacturers started making matching sets of tubs, sinks and toilets. As Ellen Lupton and J Abbott Miller wrote in The Bathroom, the Kitchen and the Aesthetics of Waste, the bathroom had been ‘re-absorbed into the fabric of the house, subject to the same attention as other rooms’. With the bathroom’s transformation from utilitarian to aesthetic space, the bathroom could now be decorated. Recognising potential in the idiom ‘an Englishman’s home is his castle’, manufacturers including bathroom producers capitalised on the inclination of homeowners to adorn and embellish interiors with their disposable income.

Despite Hollywood ushering in Art Deco motifs to homewares such as wallpaper, it took a while for colour to be accepted in the bathroom. However, when it was accepted, nothing could stop the ubiquity of the colourful bathroom tile. Ceramics and the new space-age material of plastic made for a good marriage of hygiene and style. Manufacturers were now able to make a wider range of colours more consistently, a development that was more-or-less concurrent with the proliferation of colour in advertising. 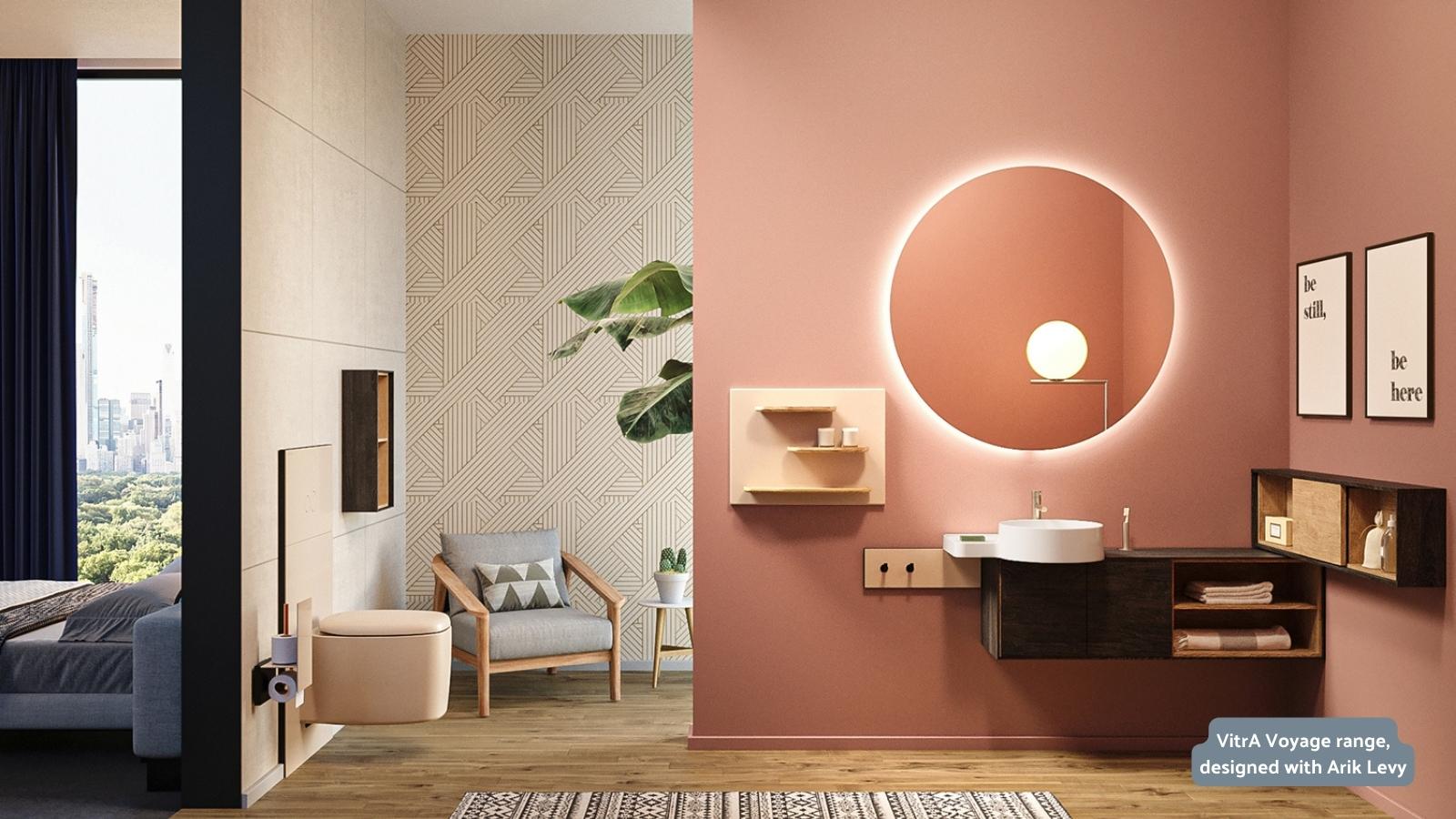 A life in technicolour meant that mass marketing could entice an ambitious middle class with gaudy and lurid colour combinations. Hunter Greens, dark pinks, burgundies, blacks and dark blues – now mostly relegated to history books – were in vogue in the 1920s and 30s, with the popularity of lighter colours emerging later in the 1950s and 60s. Like the kitchen, the bathroom had become a source of pride and expression; colours were considered a bonus to any room, catering to the new luxuries of ritual, escapism and privacy – if you were that way inclined.

Private bathrooms remain a luxury today, with 60% of the global population still without access to one. In the West, bathroom design is now characterised by whatever the user chooses, with current trends dictating subtler tones and more natural textures alongside digital technology. An abundance of choice has given people the opportunity to decide for themselves how to furnish their sanctuary. Whether your taste calls for pink carpets, Hunter Green tiles or Eggshell bathtubs – that decision is up to you. Choose wisely, as the ritual of washing oneself is both deeply personal and deeply spiritual. Like Tony Montana’s, the bathroom is a space with the potential to cure a hundred woes, or at least delay them until the water gets cold and we have to face the world again.

Ewa Effiom is a London-based Belgo-Nigerian architect, writer and producer.

Bathroom spaces for wellbeing: A conversation with Arik Levy

What does a run on toilet paper say about cultural conventions and the bathroom?