ASMR is a feeling of wellbeing triggered by specific sensory experiences. Design Update talks to WEIRD SENSATION FEELS GOOD: The World of ASMR curator James Taylor-Foster about what happens when ASMR is lifted out of our screens and into real space and the role of colour in ASMR experiences.

James Taylor-Foster has described ASMR as design that mediates between mind and body. The term Autonomous Sensory Meridian Response may have been coined as recently as 2010, says the curator of contemporary architecture and design at ArkDes – Sweden’s national centre for architecture and design – but the physical sensations of euphoria or deep calm triggered in many people by certain sounds, touch or movement like whispering or tapping are almost certainly primal human behaviours.

Taylor-Foster is talking to Design Update online from the Stockholm museum, where he’s sitting in front of a rare, colourful fabric wall hanging by early modernist architect Josef Frank. The world’s first exhibition on ASMR debuted at ArkDes in 2020, and this summer it transfers to London’s Design Museum. ‘ASMR is without doubt one of the most important movements to come out of the Internet, they say. It’s a space of real creativity that also subverts everything the Internet was designed to do. It plays on interfaces with the design objects we’ve become so familiar with, whether that’s our smartphone screens or types of wearables, like headphones.’

It’s probably no coincidence that during the pandemic ASMR engagement snowballed. Although the data can be tricky to pin down, Taylor-Foster notes that Alphabet, owner of Google Search and YouTube, has recorded a monumental increase in related searches. ‘Individuals and research communities are
beginning to take notice, asking: “What’s going on here – is it psychological, physiological or both?”’.

ASMR plugs a gap in our hyperconnected, superfast world, the curator observes, by carving out space for slowness and softness, for close listening and close feeling – a form of self-medication against loneliness or anxiety, for instance, through design. ‘There’s a certain precariousness to the way we live our lives today, a distance from the kind of experiences that were probably commonplace 50 years ago – like walking through a park listening not to a podcast but to the sound of a bumble bee close to your ear.’

Visitors to the exhibition in London will be greeted by a giant arena of padded upholstery, part of the exhibition scenography by ĒTER Architects in which kilometres of soft sausages fold and wrap around each other, resembling something between a brain and an intestinal tract. ‘What I think ASMR can teach
architecture and design,’ says Taylor-Foster, ‘is that the distance between how we experience things haptically and how we experience things visually and acoustically is not that wide’.

The exhibition gathers works from 28 contributors, ranging from sound art to motion design and immersive performances. Some works are by ‘ASMRtists’, others can be described as unintentional ASMR. Paintings and footage of 1970s TV artist Bob Ross, for instance, who’s widely regarded as a godfather of the genre in the ASMR community, feature alongside work by Björk and designers Wang & Söderström.

A new interactive experience for the UK exhibition is Meridians Meet by Julie Rose Bower, which provides a space where visitors can make their own ASMR and come close to the sounds that surround us.

What happened in Stockholm when ASMR hit the public gallery for the first time? ‘Well, the first thing we found out is that it is possible to feel ASMR in public space, to create an environment where people feel safe enough to lean into the vulnerability of feeling,’ says Taylor-Foster. ‘I walked into the gallery one morning and saw a couple, who must have been in their 60s or 70s, asleep and holding hands in front of an episode of Bob Ross’s The Joy of Painting.’

ArkDes, he notes, saw a significant increase in dwell time at the exhibition, way beyond the usual 30-minute mark. A new dimension to the exhibition as it transfers to the UK is a research project by Dr Giulia Poerio of the University of Essex, recording the first direct physiological evidence of the relaxing effects of ASMR. ‘Every visitor will be invited to respond to a questionnaire and that data will be collated to feed into Giulia's and ASMRNet’s ongoing research,’ says Taylor-Foster. ‘One of the interesting things about ASMR is how it’s triggered by different things for different people. Some people seem to be more susceptible, others don’t feel it at all.’ 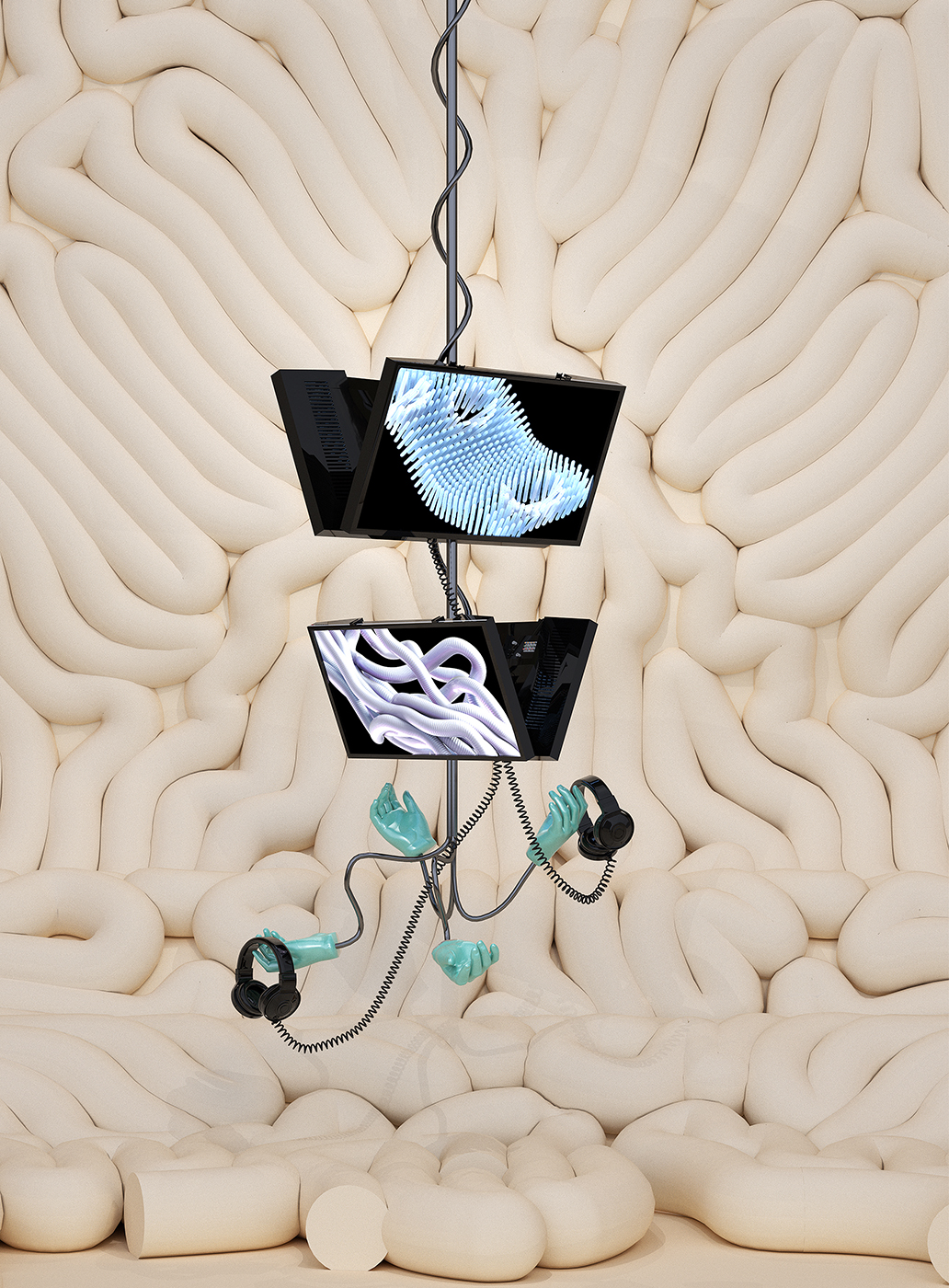 (Above - Exhibition installation by ETER architects at ArkDes)

The main recognised triggers are sound and touch, so how does colour fit into the picture? ‘Broadly I would say the language of colour around ASMR is about constructing something complementary to the experience. It tends to be pastel, with soft tones because colour has psychosomatic relationships to the way we navigate the world; red tends to mean danger, for instance,’ says Taylor-Foster. The exhibition itself is organised around two types of colour – one metallic and reflective and the other a warm beige. The exhibition identity by Agga Stage and Alexander Söder embraces internet culture colours, making use of hyperlink blue and the faded purple of a visited URL. ‘The way ASMRtists use colour in their work is often about negotiating between background and foreground. Backgrounds are often shadowy, in a different focal range. But the trigger itself, say an object, can be any colour. This is where what is in focus meets colour.‘

Asked how ASMR might influence designers and architects, Taylor-Foster cites the example of exhibition architects ĒTER. ‘I’ve noticed a change in their work since they designed the first iteration of the exhibition in Stockholm. They’ve designed a school, for example, which resembles the expression in this space, embracing a new kind of softness in their practice. I think what ASMR reveals is our relationship to softness in a world of design that is too often hard-edged. I’m optimistic that ASMR has the potential to entwine with architectural practice in a deep way.’ 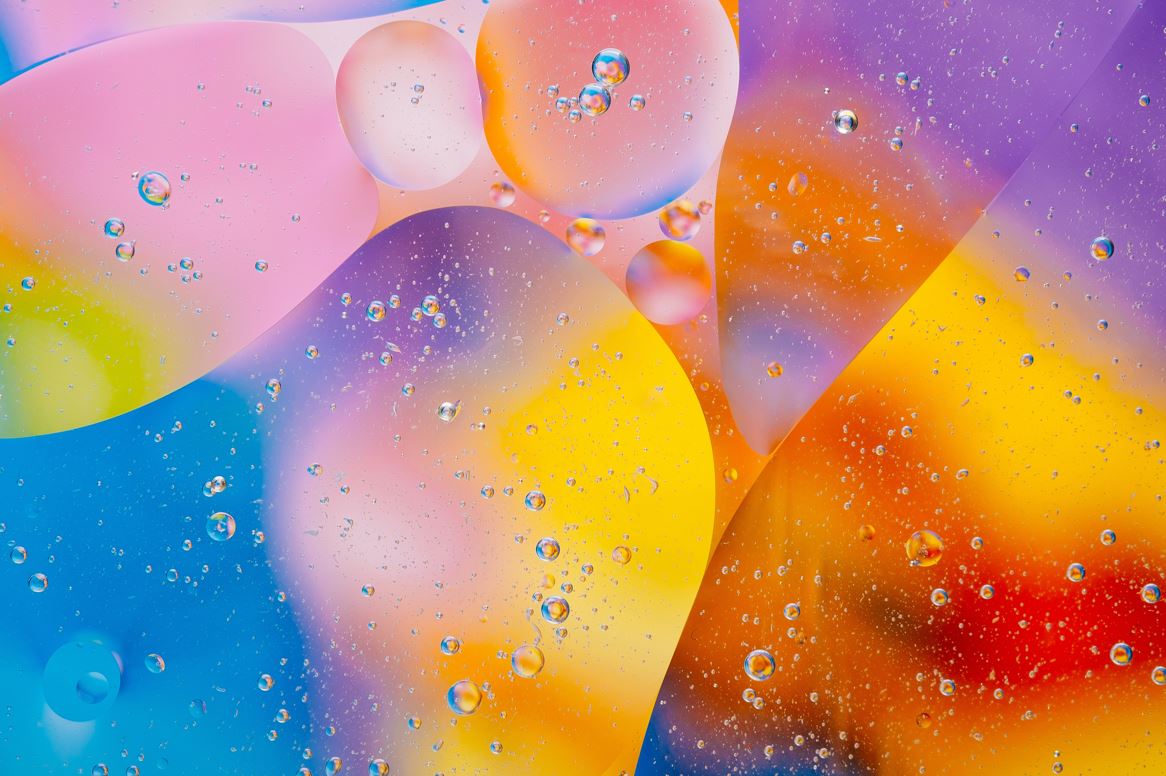 WEIRD SENSATION FEELS GOOD: The World of ASMR is on show at the Design Museum, London between 13 May–14 October 2022. It is presented in collaboration with ArkDes.

Colour + Me: with Erdem Akan and Terri Pecora