Artist Lothar Götz chats to Design Update about creating his new commission for the VitrA London showroom and working with colour, space and light

Design Update: Your work is often at the scale of buildings, creating artworks for historic galleries like the Holden in Manchester and the Hatton in Newcastle. You’ve also worked with architecture by The Smithsons, Frank Gehry, Rick Mather, Massimiliano Fuksas and now the VitrA London showroom, situated in the Turnmill building by Piercy & Co. Can you describe how you respond to buildings in your practice?

Lothar Götz: I’m thinking about the physical relationship between my body and the space, so the site visit is a crucial point. I find architecture fascinating but it’s the abstract qualities in a building that interest me more than the function. I’m curious to escape into space and I want to feel first. I like to look out for things you might not notice immediately. I’m a big fan of the way Thomas Bernhard writes, describing a perfect building from the physical side.

Generally, I walk around inside and outside; it’s more of a passive process at first. The space really dictates what I’m doing, so the artwork is unique to the building. The experience of being at a threshold, comprehending what’s happening inside and the outside at the same time is a critical moment.
My work isn’t about ‘improving’ a building or space with colour. But I do think that colours have their own three-dimensional space and that colour is something that was neglected for quite a long time in architecture. 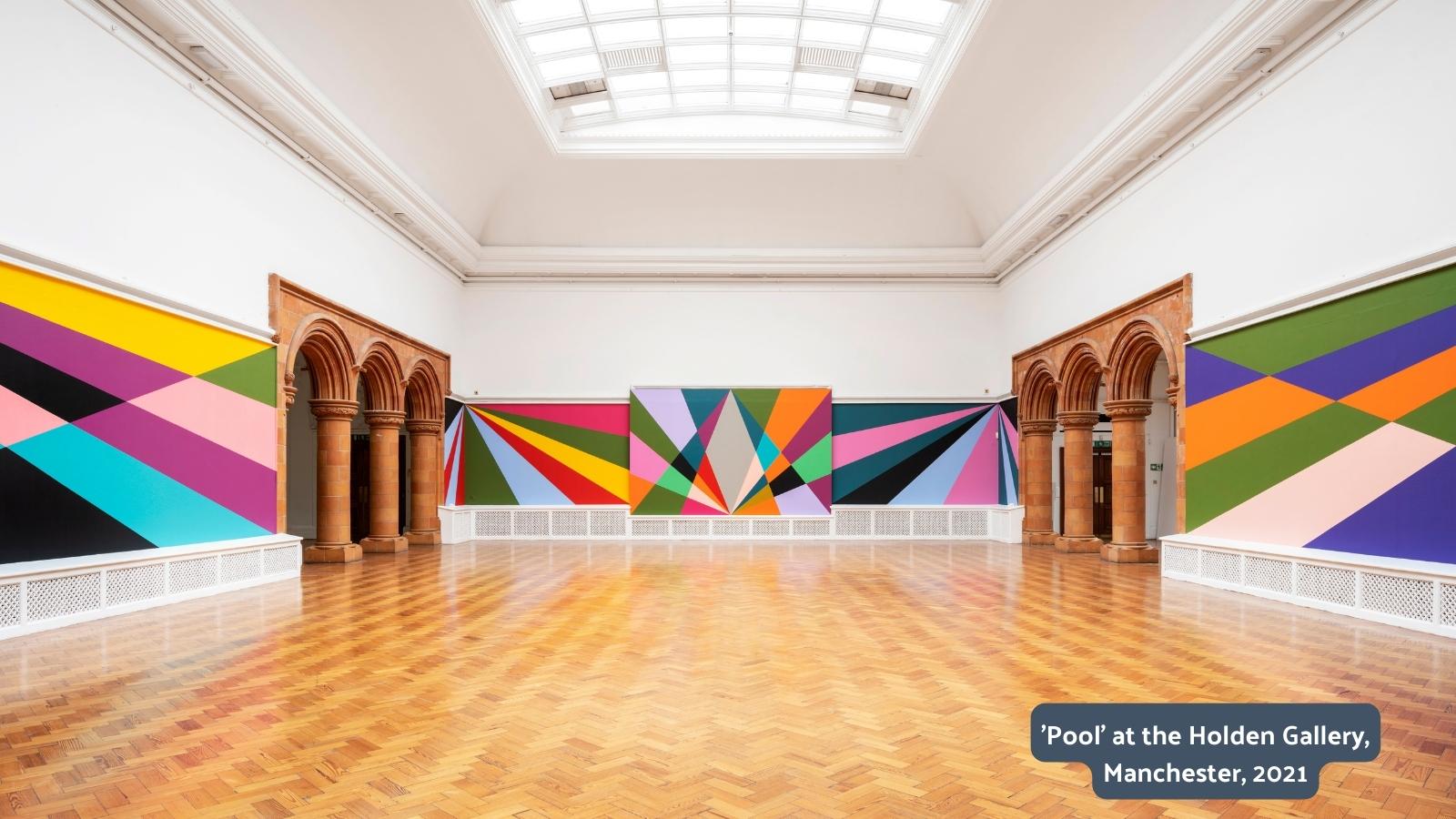 DU: What were your responses to the Turnmill building and VitrA’s showroom? What were you thinking about when you developed your artwork here?

LG: Outside, I noticed the distinctive geometry. I felt like I was in a drawing. You have all the verticals from the windows and then the horizontal lines from the brickwork; the size of the brick is very small in relation to the big windows and the whole building is sand coloured. The shapes in my artworks are not about adding but about connecting what’s already there. What happens when we look at a façade, a window and then a door for instance, is that our eye makes its own shapes, creates its own abstract geometry in connecting certain things.

I would say that my work requires quite active viewing; the artworks are not meant to be a standing-still experience from a fixed viewpoint. Here at the VitrA London showroom that means engaging in a very specific way with this building and also all the commuters as they walk past.
I was also thinking about experiences of coloured light in spaces in Morocco, where bathrooms especially often include tinted glass, and the ultra-violet glass at the Oriental eyrie of Schloß Schachen, King Ludwig II’s hunting lodge. It’s an amazing room of fantasy and colour that also influenced my artwork for The Economist Building. When you’re working with glass and colour and light something happens, there’s a new surreal reality to spaces and to the objects within them.

At VitrA London, the whole experience of space is changed by the artwork; it’s not just confined to outside and the coloured shapes you see on the windows. From inside, the space is transformed in a different way, with what we see being filtered in unexpected ways by the stained-glass effect as light moves through the space. It changes reality a little bit and plays with perceptions of colour – is that a ceramic white basin by Tom Dixon or is it something else? At night of course the experience is completely different from outside – a bit like a glowing lantern. 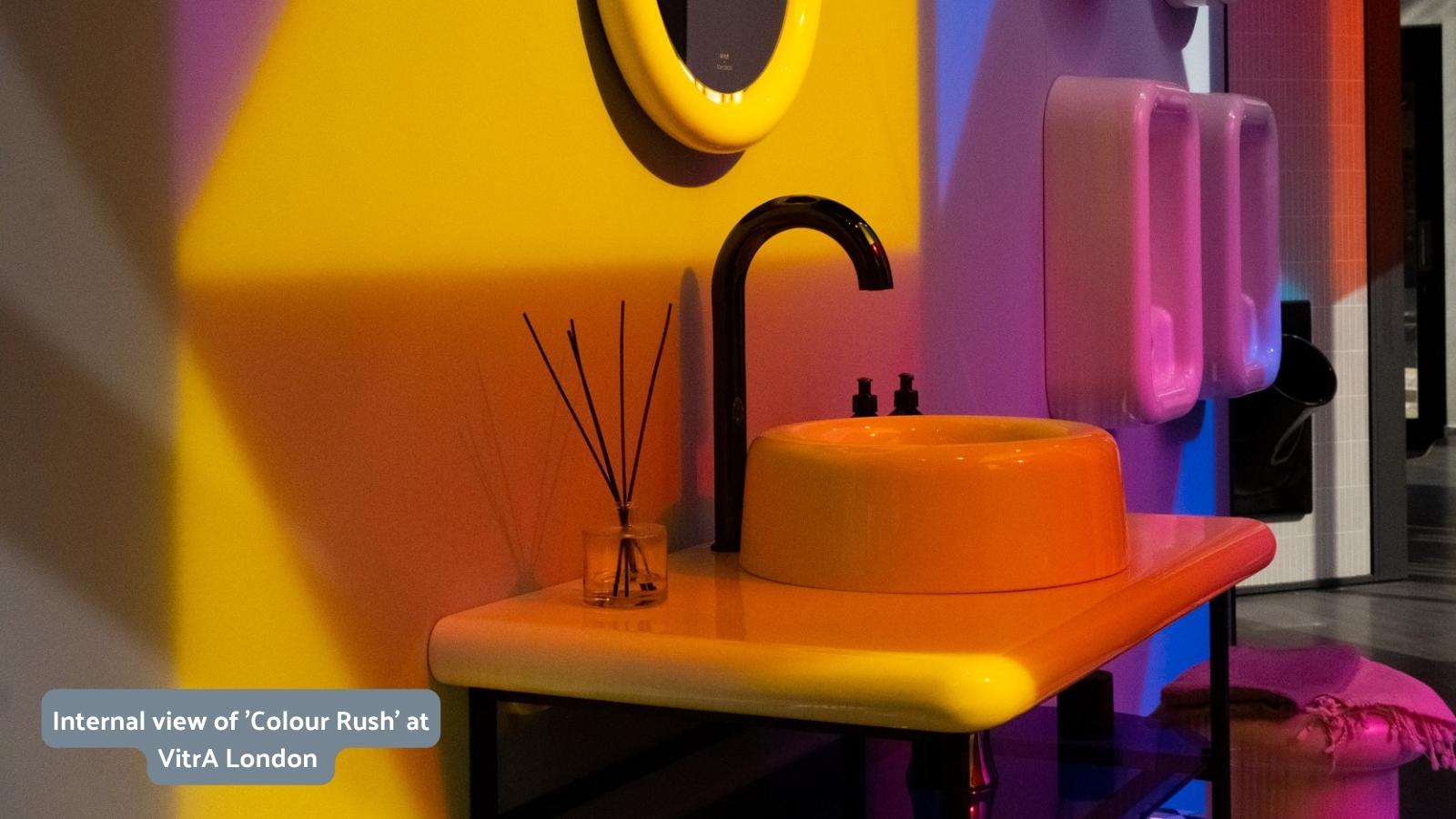 DU: Your colour palettes are distinctive and unexpected, and they seem to evolve from project to project. What are some of the influences behind your colour choices?

LG: For me working with colour is a very instinctive process. It’s true that you can find recipes if you want – all sorts of colour strategies exist but mostly I don’t use them. I look at the work of other artists and some might have a very cool colour palette, for instance, and I think: ‘Whatever I do it never ends up like that!’

I think a big influence were the wall paintings in two churches near where I grew up in Southern Germany. We went to church a lot and I think looking at those paintings saved me; I didn’t realise their impact at the time. One was a Baroque church by Dominikus Zimmermann with a ceiling painting by Anton Enderle and the other was a church built 200 years later in 1973 where the colours of an abstract mural by Franz Nagel were quite strange – colourful but muted at the same time. In the same way I think my colour sequences tend to be a bit off-beat.

DU: Your work often extends beyond the boundaries of the frame and the gallery wall. Has this been a consistent aspect of your practice from the beginning?

LG: As a student I liked painting and I liked spaces and I tried to combine these interests. Then one day when I was painting on a wall I noticed that something quite important happened, and that was this connection with the whole space. It wasn’t just about painting a 1m by 1m canvas say in the colour blue and hanging it on the wall – in that case it would always stay as a painting.

The first real wall painting I did was creating shadow lines on a wall. I painted two black lines and realised that the white in the middle suddenly stood out, it became three dimensional and was a complete contrast to the rest of the space, adding an abstract layer. At VitrA the windows, to a certain extent, frame the artwork from the outside but when you go inside the experience is completely different – more like being in a 3D abstract space where changing coloured light interacts with everything on display. 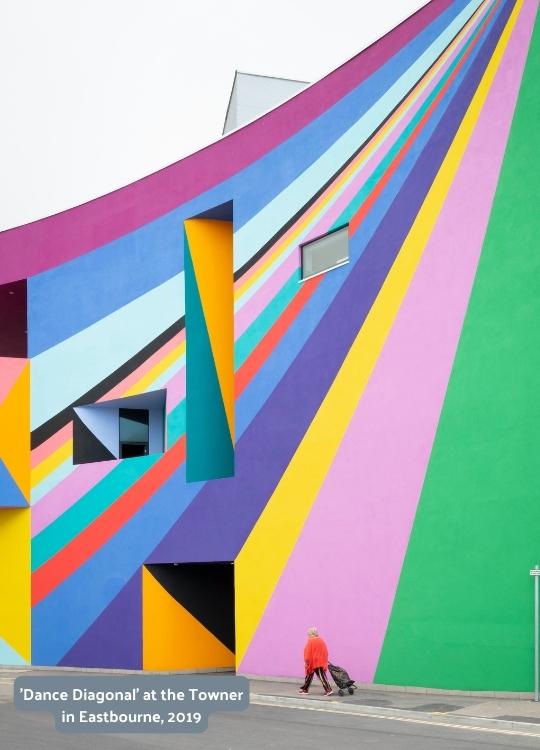 DU: When I experience your site-specific work, there’s a sense of being at the centre of a world of colour and geometry, often slightly contra to the architecture. Perspective is a big subject in both art and architecture, but it’s perhaps not so usual for the two worlds to be combined...

LG: Yes, and I think it partly goes back to that Baroque church. As a young student I thought: ‘I am a minimalist. Form follows function!’. Then someone said to me: ‘You know, you’re a real Baroque soul!’. It completely irritated me at the time. But funnily enough I went back to those spaces later because there was something there that interested me.

What I now find fascinating is balancing abstract colour spaces with built architecture to create a new spatial reality, which doesn’t end with the ceiling or whatever. Your sense of dimensions gets completely puzzled and there’s this funny relationship between the perspective of built space and the perspective of the artwork.

Design Update talks to James Taylor-Foster about lifting ASMR out of our screens into real space and the role of colour in ASMR experiences.